Every Fall semester a colleague and myself develop a mathematical scavenger hunt for several competing high schools that come to visit our campus. This year, we chose the story “Ready Player One” as a theme with a final puzzle modeled from The Magical Labyrinth, a 2009 award winning game that involves a hidden maze of walls.

First, our students were provided instructions to go retrieve several numbers from campus. This year they had to visit and retrieve numbers from the following sites:

Each of the several schools were directed to a Registration Page, created by the esteemed Dr. Mechtly in CIS.  Once they registered and typed in a registration passcode, they were advanced to the Tomb of Horrors.

Here students were given that the area of the region below is 62 and that they needed to solve for x using the numbers they found for b1, b2, and b3.  It also helps to know that the angles a are both the same.

Once x was solved for and correctly entered, the team was awarded the Copper Key. The top five teams were awarded a physical replica of the Copper Key from the movie.  They were then taken to Zork.

Here students were trying to find a specific Pythagorean triplet. The most famous triplet is (3,4,5). These triplets satisfy the equation

and can be represented as side lengths of right triangles.

Beginning with the three numbers 33, 44, and 55, students were instructed to add or subtract the numbers they found for r1, r2, and r3 from or to these numbers in some way (not necessarily in that order) to create a Pythagorean triplet.  For example, you could subtract r3 from 33, add r1 to 44, and subtract r2 from 55 as a possible check (but this wouldn’t work).

Once you find the Pythagorean triplet

in order so that

correctly to receive the Jade Key and advance to the Syrinx room!

On the Syrinx page, you were given that the average number of bricks on all 5 walls was 22. This information was enough to obtain B5.

Upon correctly entering this into the Syrinx room webpage, students were awarded the Crystal Key and taken to the Final Puzzle room.

The answers students obtained on the previous three rooms gave them coordinates to the three hidden walls that were missing. 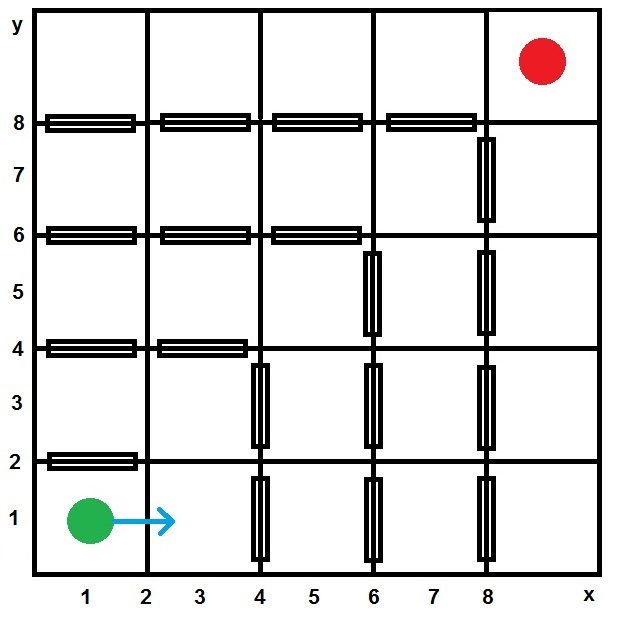 This is how you can check your answers. Your answers should all contain only two digits, one even and one odd. Using the first digit as the x coordinate and the second digit as the y coordinate, remove the walls from the above map that are missing! This will help you get a path to the final maze.

The last step was to use a large table of pass phrases that would be used to whisper to the Gatekeeper who was guarding the final puzzle.

This lead students to whisper “The Yellow Pot-Bellied Pig Rings a Bell” to the Gatekeeper, who let them enter the final puzzle pictured at the top of this post. Using the game piece that had action figures from the movie (Parzival, Art3mis, and Aech) along with a magnet on the bottom that held a metal ball underneath the surface, they had to traverse the life sized game board to the top right corner without letting the metal ball hit a hidden wall beneath and fall down.

If they solved all their problems correctly and used the correct path, they were then given an Easter Egg with candy and a password they entered into the final web page that would give them a time stamp on when they completed the race.

The top five teams were announced during an award ceremony.

Putting something together like this takes months of preparation, and a few late nights leading up to game day.  It is a fun and rewarding process putting such a scavenger hunt together and seeing the satisfaction on the faces of students as they solve the final puzzle and complete the scavenger hunt.

It is a lot of work, however, so I’m fine with the wait in between.