Next week, I will begin what will hope to be my seventh full Ragbrai experience. Before I hit the road, I thought it would be fun to look back at some of the fun times we’ve had over the years.

Our first Ragbrai in 2009 went from Council Bluffs to Burlington, IA with overnight stops in Indianola and Ottumwa. At a distance of 442 miles and a total of 22,806 feet of climb, it was the hilliest Ragbrai that we’ve ever experienced.  Our second and third day ever of having ridden Ragbrai had us climb 5096 feet and then 4470 feet. The hilliest and third hilliest days of Ragbrai we have ever done.

It was the year Erin and I became engaged, as I put together a big engagement party at my mother’s place it Ottumwa. See the opening picture.

It is hard to describe now the awe that I felt on the first morning as we took off from Council Bluffs. We had just taken down a soaking wet camp (from dew) and there was a pretty thick fog.  I was mesmerized by the number of bicycles all around me.

Our second Ragbrai ride was the the second longest clocking in at 451 miles total (the patch says 442, which is inaccurate).  This was the year I kept a journal. On Friday evening before we got on our charter with Lake Country Cyclists, a tornado went right by dad’s place in Indianola. He witnessed it coming directly at his house, but it turned and they missed the damage. Having missed his house, he was able to still go on Ragbrai.
Lonnie joined our small crew for the 2nd year. Erin and I thought it would be fun to wear the same shirts the entire week. Here you see us wearing the Novinger Coal Miner Days 5K shirt. We were big into races back then.

One of the highlights of the week for me was swinging from this amazing rope swing. Not too long after I had left, someone went off nude and they had to shut the whole thing down. They had it roped off, were charging $5 to get in, and then you had to sign a waiver. 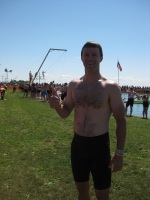 The 2010 Ragbrai was also the one that contained Potter Hill. It was brutal, as only a small percentage of riders could make it to the top without walking their bikes. From what I understand, walking your bike up the hill was tough enough.

We finished in Dubuque for another fantastic year. It was the year of my favorite jersey, which I still have and will wear this year.

At 450 miles, 2011 was the third longest ride I have done (although it may as well be tied for 2nd since 2010 was 451) and the second hilliest at 20197 feet of climb. The first two days were brutal, climbing 4298 from Glenwood to Atlantic, and then 4719 from Atlantic to Carroll.  These two days were the 2nd and 4th hilliest days of Ragbrai that I have ever done.

Erin took a break from Ragbrai in 2011, and would continue the streak until her return in 2014, as she was putting a lot of focus on her dissertation.

Prior to Ragbrai 2011, I created several ideas for a video that I would create. This script was more detailed than my entire journal of Ragbrai itself. The videos I took were only during the first two days. Apparently, I gave up on the idea.

So, instead of any decent photos, I have a bunch of crummy videos that could not be used for anything.

There were nine of us that started the longest (at 471 miles) and hottest of all of my Ragbrai rides, and only four of us that finished. The heat took out three, and a storm in Marshalltown the last two. It was myself, Don, Larry, and John that made it the whole way. Turns out Don and Larry are the oldest of this crew, too. They are rock stars.

Opposite of 2011, I captured both videos and pictures and had a much better plan in place of creating a big video.  I also journaled a lot more and wrote down some very good advice for my future self:
I had forgotten about the last piece of advice. The idea came from encouraging people up hills and coming up with a speech in hindsight that I could have delivered to my dad and Lonnie on the fifth day after a storm took down their tent and soaked all their stuff. It would have motivated them to keep going. Someday, I will bring this idea to fruition.
Here was the highly unedited and way too long video I put together of 2012.  I’ve learned my lesson on keeping videos like these under 5 minutes, and preferably, under 3.
My 20th blog post ever happened to be about Ragbrai 2012! I’m not sure why I didn’t post any pictures.

“Rabrai is over and it was the best ever. I suppose I only have four others for reference, but it was pretty awesome. I’m sitting here relaxing and listening to Radiohead when I should be blogging about this instead.”  – Tuesday, July 30, 2013 Journal Entry

Ragbrai 2013 was unique to the previous years, as my core group shrunk down to just Dad, Lonnie, and me riding with Lake Country Cyclists. Don and Larry were still on the ride, but they were with a different outfit. My friend Jonathan and his sister Becca were biking it, too, with my friend Sarah (Jonathan’s wife) as their driver.

When I look through the pictures of Ragbrai 2013, I took a LOT of selfies. Many of them included a picture of me in front of each pass-through-town’s sign. I’m not sure why I thought that would be a good idea. We all live and learn.

Ragbrai went through Des Moines in 2013. I hung out at the craft beer tent in downtown Des Moines for hours with friends Cory and Simpson. Although they had ridden that day, I couldn’t wait long enough in any of the towns for them. They simply could not catch up.

I had an extremely brief paragraph and four other pictures of Ragbrai 2013 in my blog post, My Busy Summer.   One of those pictures includes Cory.

I recall walking up to the square in Fairfield, IA and almost passing out from low blood sugar. I began sweating profusely, and went into a gas station really quick to down some sugar in the form of soda and cookies (I think). It gave Jonathan, Sarah, and Becca a little scare, but it soon passed.

By the time we got done with the Indian Food Buffet downtown, we had forgotten about it. Not really.

I was able to blog about Ragbrai 2012 much more extensively!  However, there are definitely elements missing from that blog. Take these videos of Jonathan for example, where he plays Taps at three different campgrounds. Try and follow me here… Chops with chops showing off his chops.
Dennis, our driver, made Ragbrai 2016 the actual best Ragbrai I have experienced. It will be hard to top this.

Our move to Topeka hindered us from doing Ragbrai 2015.  Even for Ragbrai 2016, we did not fully commit, but only went for the Thursday and Friday rides of the week.
Cory, Simpson, and Juan rode Wednesday from Leon to Centerville and camped there for the evening. Mom took Ted, Jonathan, Erin, and me over to Centerville to join them Thursday morning. While Jonathan, Ted, and Erin beat us all to Ottumwa, I rode with Cory, Simpson, and Juan almost the entire day.

Around the corner from the Iowa Craft Beer Tent, I threw my shoulder out of socket on a slip in side. This had just happened during my first softball game in two years just two weeks prior. I tried to coach people to get it back into place, but to no avail. Instead, I instructed someone to go up to the roadside and ask for a doctor.

Within 10 seconds a doctor pulled down the driveway exclaiming, “I’m a doctor. BUT. I’m a drunk doctor.”
Once we explained that it was just a shoulder out of place, he said that wouldn’t be a problem. A few instructions later, it was back into place. The crowd that had accumulated cheered. Someone else has the picture of the doctor and me.
I was very skeptical of my ability to ride with Erin, Ted, and Jonathan the next day (Friday) from Ottumwa to Washington.  Ultimately, I decided to ride the first few miles and turn around if my shoulder hurt too much. Turns out, the shoulder felt better by leaning on handlebars. And to think, I was really close to calling it quits.

I convinced these guys to go much slower and enjoy the ride on Friday. That we did. When we arrived in Washington behind Erin at the Hy-Vee, we purchased a 4-pack of Tallgrass Top Rope IPA and drank them in the parking lot while we waited for Mom to come get us from Ottumwa. She was such a big help.

So… Ragbrai is next week. This year, Juan and I will be the only ones riding the whole week. Erin, Cory, and Mindy will be joining us Thursday and Friday so they can experience Decorah. Mom is planning on taking their camper up to Decorah on Sunday and staying the entire week.
I’ll report back on how it goes.

2 thoughts on “Ragbrai Over the Years”