The weather for our entire trip to the northwest was gorgeous. There were only a few times where it got a little warm, and how we dodged all rain is beyond me. We traversed 9 states over 11 days, and Erin drove almost the entire way.

Our trip seems to be in three parts. Part I will be the trip out, highlighting Palouse Falls State Park. Part II will be arriving at the northwest corner of the U.S., with Deception Pass State Park as the main attraction. Finally, Part III will be our trip home, and our amazing experience at Devils Tower.
Along with our own experiences and stories, I hope to also provide recommendations for those who also want to visit any of these spots.

Originally, our first stop was going to be in Fort Collins for a quick visit with my cousin Jody. After working through a mishap in which I provided her with the wrong date (one week early), we worked it out so that we would join her camping in Roosevelt National Forest along Stove Prairie Creek on some private land.
I had just camped for 7 straight days on my Biking Across Kansas trip. However, that was in a one-person tent. With Erin along, we would be staying in our luxurious Base Camp 6.

We weren’t exactly prepared to camp with no amenities, but we improvised. Holes needed to be dug, fires needed to be started, and showers were just a dream. When roughing it, remember to bring the following:

Driving from Colorado to Wyoming, and then from southeast to west Wyoming was beautiful and windy. We had not planned on lunch in Laramie, but our timeline changes on the road. I contacted my graduate school friend Greg who is a professor of math at the University of Wyoming to check if he was available for this spontaneous stop.

We met him at Altitude Chophouse and Brewery and had a great time catching up. If you find yourself in a similar situation, don’t make excuses not to contact someone you haven’t seen in a while. Just do it. You will feel immeasurably better for having done so.

Pushing on, we arrived in Alpine at Grove’s River Cove RV Park around 7:30. Erin and I set up a tent, stuffed ourselves with food from our cooler, and drove to Melvin Brewing in about 30 minutes. This left us an hour before closing.

The brewery is next to an industrial area down a very bumpy, gravel road. It sits on the fork of the Salt and Snake Rivers. If one wanted to swim out from the point about 500 yds, you would be in Idaho.

One day long before the brewery existed, the founders of Melvin Brewery were talking about melvins, a slang term for a frontal wedgie. One of the founders suggested, “Wouldn’t it be cool if we could get someone to ask for a melvin?” To which, another founder inquired, “What if we could get someone to buy a melvin?” This discussion, we found out through our tour guide, was how the brewery was born.

Since they are leasing their building at the moment, they were not supposed to paint their name on the building. They did anyway, and said, “send us the penalty fee.” The small town of Alpine didn’t really like that, but the mayor drinks there all the time, so everything is probably going to work out for them.

In case you are interested, here is a life-sized version of Melvin with us and some new contacts in Fort Collins we will most likely hit up next time we visit.

We brought some Melvin beers back with us, but I don’t think they will last long enough for you to try any. Sorry.

A very short distance away from Alpine, WY is the city of Idaho Falls, ID. We thought getting a coffee and walking along the falls for a while was a good idea. 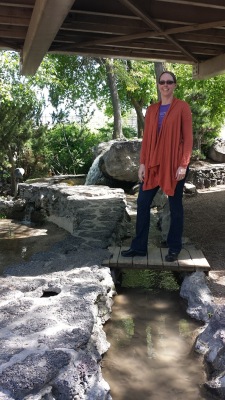 The Idaho Falls Greenbelt Trail and Sportsman Park were a pleasant break from the car. Our next stop would be a late lunch at a rest area in Lima, MT. We set up a picnic spot and enjoyed a bottle of King Sue.

In Missoula, we had our final night of camping, although it was urban camping at the KOA Holiday. I wouldn’t exactly call that roughing it.

Travel Tip: If you’ve got a tent, and like camping in general, staying at KOAs are a great way to save money when you’re on the road.

Highlander Beer Company was our choice for some pre-dinner drinks. The Iron Horse Bar and Grill was where we had dinner, and then we finished the evening across the street at The Old Post. Their bloody Mary mix was staring us in the face, so we had to get one even though bloodys are our usual morning drink. They were fabulous.

Suppose you don’t keep a journal and you’re trying to remember where you went on days 4 and 5 of your trip to the northwest in detail. If you have an android smartphone, and if you use Google Maps, one way of checking this information is through your timeline. Your location services need to be on at all times, though.

For example, Monday, June 19th was the fourth day of our trip. My timeline says I had breakfast at Hob Nob in Missoula, MT, and then visited a book store called Shakespeare & Co. right next to where we parked. We then stopped at a travel center on our way for Huckleberry Ice Cream. (My timeline doesn’t know that we purchased Huckleberry Ice Cream. This is a detail I had to fill in on my own.)

Once in Spokane, WA, we had to kill some more time since Jessica had to finish her grading for the semester. That time was well spent at Iron Goat Brewing Company. Fifty-five minutes later (according to my timeline), we left for Jake and Jessica’s cabin.

To burn off the margaritas, they took us to Manito Park and Duncan Garden for a walk in the park.

Having just had a late meal at El Rodeo, we went to the Manito Tap Room for drinks. We stayed there long enough that we eventually got hungry and didn’t want to move anywhere, so we ordered food there. It was great to finally meet Jessica’s beau, Jake. They seem to be a very good match.

On our last day with Jake and Jessica, they drove us down to Palouse Falls State Park. This was definitely one of the highlights of our trip, and hence, why it deserves its own part. We spent much of the day there, and even had a picnic with meats, cheeses, and wine.

With all of the money we saved up by camping and taking food with us on the trip, we were able to splurge that evening at the Wild Sage Bistro in Spokane. There were cocktails, starters, entrees, and a port flight for dessert. It was decedent.

2 thoughts on “PAC it Northwest: Part I”