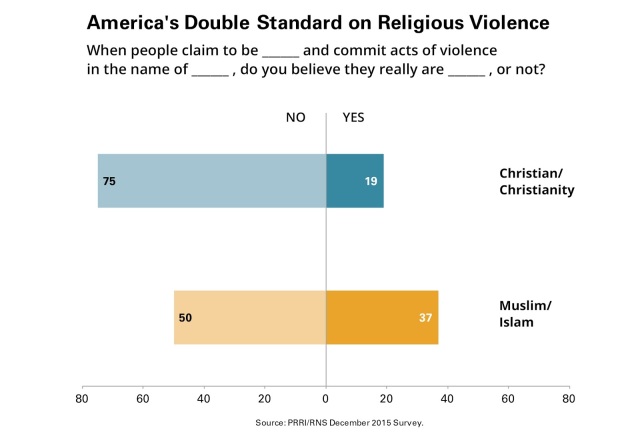 This year in my basic statistics classes, after I give the announcements I begin class by giving them two pieces of information.

The purpose of the first is so that the barrier between professor and student can be breached. Getting to know me as someone that has a life outside of work and does things that are fun and interesting can help build a connection with students that I never had.  Today, I went to the skeletons in the closet, and informed them of something I’m not proud of for the purpose of showing them I’m human and I can overcome difficult times.
Today’s “Did You Know” segment of the two times in my life, one at age 18 and one at age 23, when I spent a night behind bars.  I didn’t go into specifics, but I could tell they did find this information very intriguing.
The number of the day was 50, which is a percentage of Americans who answer NO when asked, “When people claim to be Muslim and commit acts of violence in the name of Islam, do you really believe they are Muslim, or not?”  This came from the Public Religion Research Institute and was included in their article, “Americans’ Double Standard on Religious Violence.”
The double standard becomes apparent when you ask Americans the other question, switching Muslim/Islam with Christian/Christianity.  Then, 75% answer NO.  This is very interesting.
When I present such data I need to be careful.  Instead of drawing any kind of conclusion, I remarked on how it made me think of how I would answer the question (using Christian/Christianity or Muslim/Islam) without having read about the study previously.  Would I answer yes to one and no to the other and have a double standard? Or would I be consistent in my answer and say either yes to both or no to both?

Indeed, this is a difficult question to answer.  I can find in both the Bible and Quran passages that would condone and encourage acts of violence, so I could see somebody using those verses and thinking they are acting as a true Christian or Muslim.

It is complicated, but it deserves thought.

My hobbies include cycling, running, home brewing, coffee roasting, reading, traveling, and problem solving. Most recently, I've immersed myself into the world of Brazilian Jiu-Jitsu. I obviously like to write, too, and want to share some of my experiences and knowledge with the world. View all posts by Jason Shaw