I have a shitload of grading to do.  There were two stacks of homework and two stacks of exams on my plate to trudge through during my break.  Last weekend, I planned on grading one stack for each weekday through the break giving myself one extra day just in case.  It is now Friday and I’m only through two stacks.  Funny how things like that work out.

Besides reading Wool (which I review here), Erin and I had some much needed time together.  She is working in Perry, KS now as the director of the Highland Community College Perry Center campus.  That is a good distance away.  Enough so, that a commute home every night is not reasonable.
So far, we’ve managed very well.  We keep quite busy during the week so that we can enjoy the weekends together.  There is no long term plan in place yet.  The short term plan is to continue doing what we’re doing.  If two years go by and we’re still doing what we’re doing, we may start considering other options.  For now, we’re doing fine.
Erin brewed her a Mosaic IPA on Wednesday before Thanksgiving.  This was her first home brewed beer in a LONG time.  With some coaching and help from her seasoned brewing husband, she created an amazing batch of wort that has great potential.  In fact, in a 6.5 gallon fermenter, it started blowing off on Thanksgiving morning.  That means the yeast were so active they ride the carbon dioxide they create all the way through the airlock making a mess if you aren’t set up for it.
Erin enjoys cooking like I enjoy brewing.  So, she busied herself with cooking on Thanksgiving, while I graded, did laundry, enjoyed her cooking, and drank many different concoctions.
For breakfast, she cooked us some open faced sandwiches.  She first spread pesto and Parmesan on bread and broiled it, before topping it with a tomato, and some fried mushrooms and eggs.  She then made some POMimosas, using Prosecco and POM (pomegranate juice) rather than orange juice. 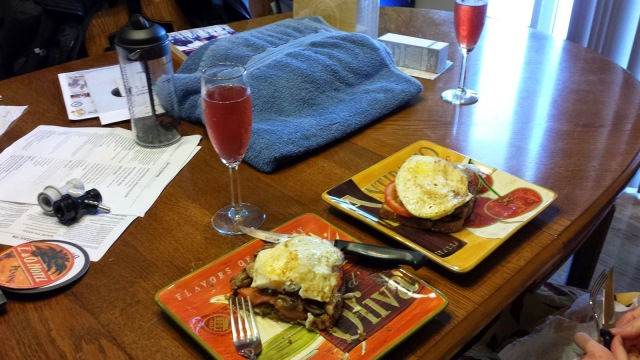 For lunch, we ate some kale pesto rotini pasta topped with Paremesan with a side salad.  The pesto was actually leftovers from the previous day. 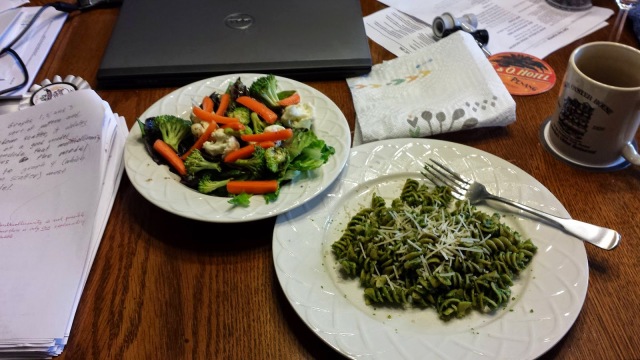 And then for our non-traditional Thanksgiving dinner we had some turkey breast tenderloins braised with rosemary, sage, and thyme, basted in white wine and roasted in the oven to perfection.  There were some steamed veggies on the side along with some roasted fingerling potatoes and garlic. 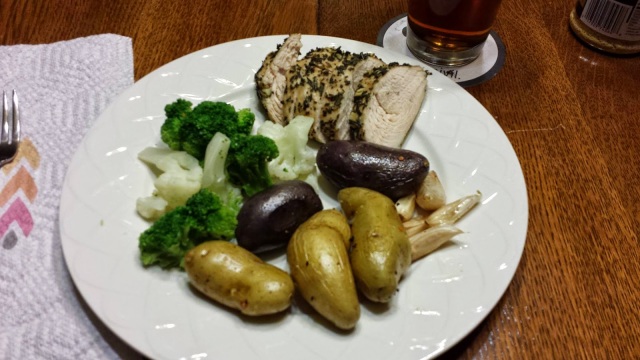 To give you an idea of how much Erin has been cooking all week, here is a picture of the fermentation fridge.  We can use the fermentation fridge as a regular fridge during the winter months, since I need the heat pad to maintain my fermentation temperatures between 64-68 F.  The fridge is needed in summer months and for lagering year round.  I’m just not doing any lagering right now. This is a good thing since we need the space for all our bottles and food right now.
Decided on the spur of the moment, we chose to re-watch Christopher Nolan’s Inception on Thanksgiving evening.  This is one of my favorite films, and definitely my favorite by him.  I love the open ended ending.  The viewer has to make up their own mind on what is the dream and what is reality.  And after several viewings, I’m fairly certain that he made the movie so that one could have arguments for either and that there isn’t a true answer.  Very much like Frank Stockton’s The lady, or the tiger?
The scene where I believe he lets it be open ended is when Yusuf (the chemical expert) takes them downstairs to see several people together dreaming as one.  Cobb (played by Leonardo DiCaprio) asks to get plugged in.  We see some quick dreams of his late wife, and then he wakes all frazzled, unplugs and runs into the bathroom to splash water on his face.  He pulls out his totem to make sure he’s not dreaming. This is a top:

Cobb knows that if the top stops spinning, then he is back in reality.  If it continues indefinitely, he knows he is dreaming.  If it were me, I would just have to do some long jumps.  If I jumped and somehow floated along the air for a ridiculously long distance, I would know I was dreaming.  If I plummeted back to the earth well under 8 feet, then I would know I was in reality.
Anyhow, Cobb is interrupted in this scene before he can let the top settle.  He knocks it off the sink and picks it up off the floor.  For the rest of the movie, we can now make an argument that he is one level down in a dream world. But we can also make a fine case that he is in reality.  Which did you choose?

One thought on “Thanksgiving. And a review of Inception (the movie).”