It has been a long time since I brewed without using a yeast starter.  Even if I’m using Wyeast, I still like to slap the pack and give it a head start in an Erlenmeyer flask.  This takes a half-hour to 45 minutes of my time a few days before brew day, considering prepping, boil time, cool time, pitch, and clean up.  Then I was introduced to canning yeast starters through the Deputy Chairman of the Kirksville Guild of Brewers, Mike Martel.  Pop the top, pitch, and your yeast is started.  What a time saver.  So, I decided to give it a try today. 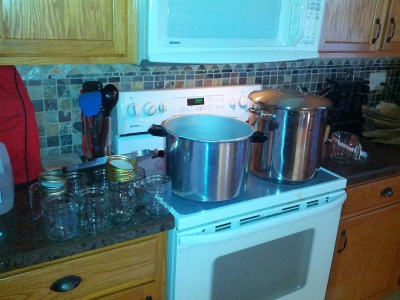 In the above picture you see the eight canning jars that I would be using, the pressure cooker, and the pot that was steeping about 1.5 lb of grains in a little over a gallon of water.  After steeping for 30 minutes at 150°F, I put the burner on high and brought the wort to a boil making sure to take the grains out before the temp got above 170°F.

After 15 minutes I turned the burner off and took the pressure cooker off the burner, then let the pressure decrease naturally.  Once it came down, I took the lid off and arranged my beautiful jars of canned wort in a few rows for a nice picture.

Well, then I took time to write about it, so I really haven’t saved much time at all when you think about it.  I hope you enjoyed the information at least.  For a lot more detail (maybe too much in my opinion), check out Canning Yeast Starters from a Sept. 2006 issue of Brew Your Own magazine.