Monday morning in Taos was a sleep in day for Erin, whereas I had to wake up and hydrate myself as I have been suffering from congestion and sore throat.

Like every morning for the rest of the week, I will begin my day with leisure reading (today I read two chapters in The Great Hunt by Robert Jordan, and a few sections of What Hath God Wrought).  I watched the episode of Homeland that Erin watched without me on Sunday since I fell asleep while uploading scores from my class to the grade book.
We made Rip’s Big Bowls for breakfast so we could lounge around most the morning.  For lunch, we visited the Dragonfly Cafe for the second day in a row (previously we enjoyed breakfast there).  Erin was craving a Gyro sandwich that she had there a few years ago when we were here.  I ordered a Veggie Burger that was outstanding.
We stopped by the Post Office for post card stamps on our way back to the car.  When we got back to the house, we took a picture of the sign I created for my second mock post on Mondays in March. 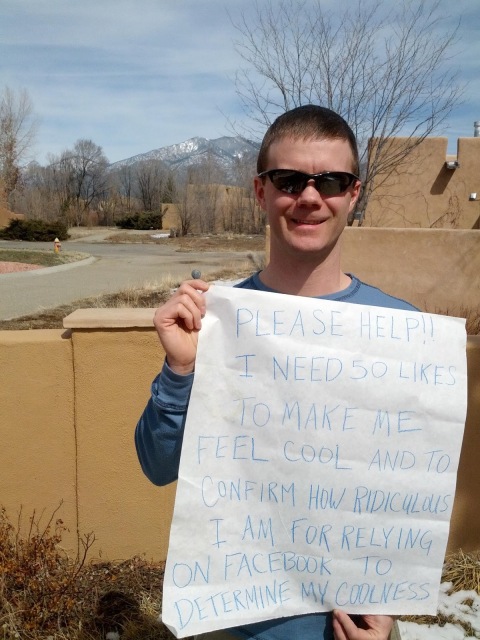 I took a long nap, read and wrote some more, and then we watched the third episode of Homeland. On the DVDs, there was only 3 episodes on the first disk, while there is 5 on the first Blu-Ray disk.  This had us out of sync since we had Blu-Ray disk 2 with episodes 6-9. How were we to watch the 4th and 5th episodes?  Since we are on vacation we justified renting them through Amazon Prime.
Yesterday evening, we enjoyed a couple of bottles of wine that Trish & Joseph offered us in exchange for helping them out with the leaky roof on Sunday.  They were good.  Monday was a very unproductive, money saving, lazy day in Taos.  But hey, we’re allowed a few of those when spending 5 days.
Addictions
Some of my addictions include peanut butter, Mexican food, pizza, and Doritos.  Whenever I begin consuming any of these, it is very hard if not impossible to stop.  To deal with this, if I decide to consume any of them, I do two things: ration it out in small doses and make it very difficult to get another ration.
Erin has an addiction of her own that many of you can relate with. The addiction showed through brightly last night as we finished watching the 8th episode of Homeland.  She wanted to keep watching more and I reasoned that it was time for bed (11pm).  I also reasoned that we had watched enough T.V. for the day (since we had watched episodes 3-8).  After all, we had the rest of the week to watch the rest of the season (through episode 12).  What ensued was the closest thing to a temper tantrum as you can get as an adult.
I only write about this because many of you can completely sympathize with her.  But, many of you also can sympathize with me.  To top that off, many of you are couples with the same issue.  Life is funny.