On Tuesday, February 24, after two games of pick-up basketball at the gym, which is part of my regular routine, a b-ball partner of mine gives my belly a little light tap and says, “It looks like triathlon season is over.”

There are some that would not handle this well, but I don’t get offended with this kind of stuff. He was right. The winter break has been a lazy one for me and I put on a few pounds. I admitted it. Later that week, I realized that this statement was the best thing he could have said to me.

Three years ago, I went on a diet and lost close to 20 lbs. Over the course of 3 years I’ve gained about 75% of that back. So, time for me to go on another diet. When I go on diets, I go all fucking out. Losing weight is the hardest thing to do in life, and if you’re going to do it, you need to be completely and totally committed.

So, here goes. Each Friday, to keep me honest, I’m going to post an updated graph. I will continue to post these until I’m at 165 again. 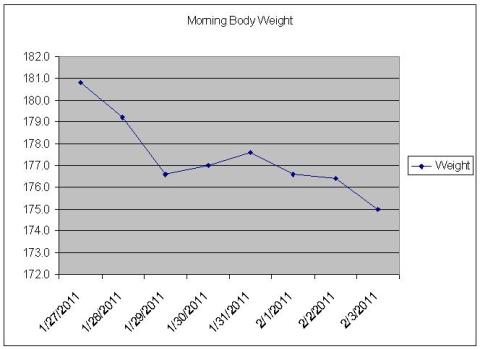